Shadow & Bone is book one of Leigh Bardugo’s Young Adult fantasy novel in the Grishaverse trilogy. Shadow & Bone introduces the Russian-inspired fantasy world via the story of the “soldier. Summoner. Saint. Orphaned and expendable, Alina Starkov is a soldier who knows she may not survive her first trek across the Shadow Fold―a swath of unnatural darkness crawling with monsters. But when her regiment is attacked, Alina unleashes dormant magic, not even she knew she possessed. Now Alina will enter a lavish world of royalty and intrigue as she trains with the Grisha, her country’s magical military elite―and falls under the spell of their notorious leader, the Darkling. He believes Alina can summon a force capable of destroying the Shadow Fold and reuniting their war-ravaged country, but only if she can master her untamed gift. As the threat to the kingdom mounts and Alina unlocks the secrets of her past, she will make a dangerous discovery that could threaten all she loves and the very future of a nation. Welcome to Ravka . . . a world of science and superstition where nothing is what it seems.”

The intended audience for Shadow & Bone is young adults, which is comprised of ages 12-18. I’d say one of the main themes of emotional manipulation and abuse may go over most of the younger YA audience’s heads. While that is a general assumption based on the ages, I think that it can be confusing if the younger reader takes things quite literally and/or has a difficult time reading between the lines, understanding topics of manipulation, or mental health. I would better categorize this book for older young adults and even adults versus general YA. The plot itself is suitable for the general YA market but again those themes may not be fully recognized, understood, and appreciated the way Leigh Bardugo has intended. The contents of the book can be difficult for some to read. If you are triggered by emotional abuse, abandonment, or physical harm this may not be the book for you.

Independent parties have studied the world of the Grishaverse and compared it to our context/development. Since the Grishaverse falls in the fantasy genre and has its own set of history, technology, and structure to society, the closest assumption to when Shadow & Bone takes place would be equivalent to our 19th century based on the descriptions of technology and transportation Leigh Bardugo has written.

The book is written in the first and third person. The book has an introductory chapter which is told in third person format to set the scene. Then, the story continues from the main character, Alina’s, point of view. The last chapter is again told in the third person as a way to wrap up the book. In my collector’s edition (photographed and linked throughout this post), the author included a letter at the end of the book. In all honesty, I enjoyed the letter more than the explanation in the book about that circumstance/part of the plot. It was easier to understand and less jumpy. I particularly enjoyed how the story ended again in the first person instead of the third. It felt odd jumping back and forth at the end.

Shadow & Bone follows Alina Starkov and other the main characters extend to The Darkling and Mal Oretsev. There are a handful of other characters who regularly appear throughout the chapters. My favorite is Genya and David. While Alina progressed through her own emotional journey and self-development which was relatable, the telling of it at times was not. It’s easy to draw plot parallels and dissect the similarities between the fantasy world and the one in which we live since the commonality is the emotional component. However, the author relied on explaining (and at times rather vaguely) what was happening internally to Alina instead of inviting us along to experience with her via the five senses. The anxiety was told straightforward instead of cluing us in on the heightened awareness she may have had during that moment or how she could practically hear her heart beating and wondered if anyone else could. There were many missed opportunities to draw the reader in and form a deeper connection to the characters. Often the story only surmounted to words on a page rather than an experience.

In regards to the likability of characters, this is very much dependent on personal preference. There are qualities I feel everyone could like in all three of the main characters, along with the supporting ones. Personally, I would have liked to uncover more of each of the characters instead of being told outright who they were. There was a lack of discovery with them, which made me feel like they were blah when in reality shifting words around or explaining in a different way could have further brought them to life and helped me to see where it is the author was going with their development. I found Genya most compelling. The way her character was explained was in my opinion, better written and portrayed than the main ones.

I enjoyed the plot very much. Despite watching the show before the movie, I was still surprised at all the right moments and grossed out when appropriate. The plot wasn’t as predictable as others in the fantasy genre. It was a well-developed world and can compete in this regard with the Harry Potter franchise. From the custom drinks to the specific colors and representation of garments, games, classes, and traditions, Shadow & Bone immersed me in Ravka and the surrounding territories.

The manuscript could have been looked over more closely. I have to wonder where the editor was in this. I counted the same word on one page that was not following patterns or for a literary purpose, four times. While this doesn’t sound like a lot, words that are not essential vocabulary or connecting words to form sentences can pull the reader from the story. It also communicates to the reader that the author/editing team rushed through and didn’t want to set enough time aside to fine-tune specific pages/chapters. While of course things like this may slip through the crack (understandable) there were too many instances for me to deem this as such and rule it more so as rushed writing or an editor who may have not had enough time to dedicate towards supporting the author tell the story to the best ability. I will say Leigh has grown as an author since Shadow & Bone was published in 2012. I’m listening to Six of Crows on Audible and reading Siege & Storm (the follow-up to Shadow & Bone). Both of these books have improved drastically on the aspects of Shadow & Bone I wasn’t a fan of. 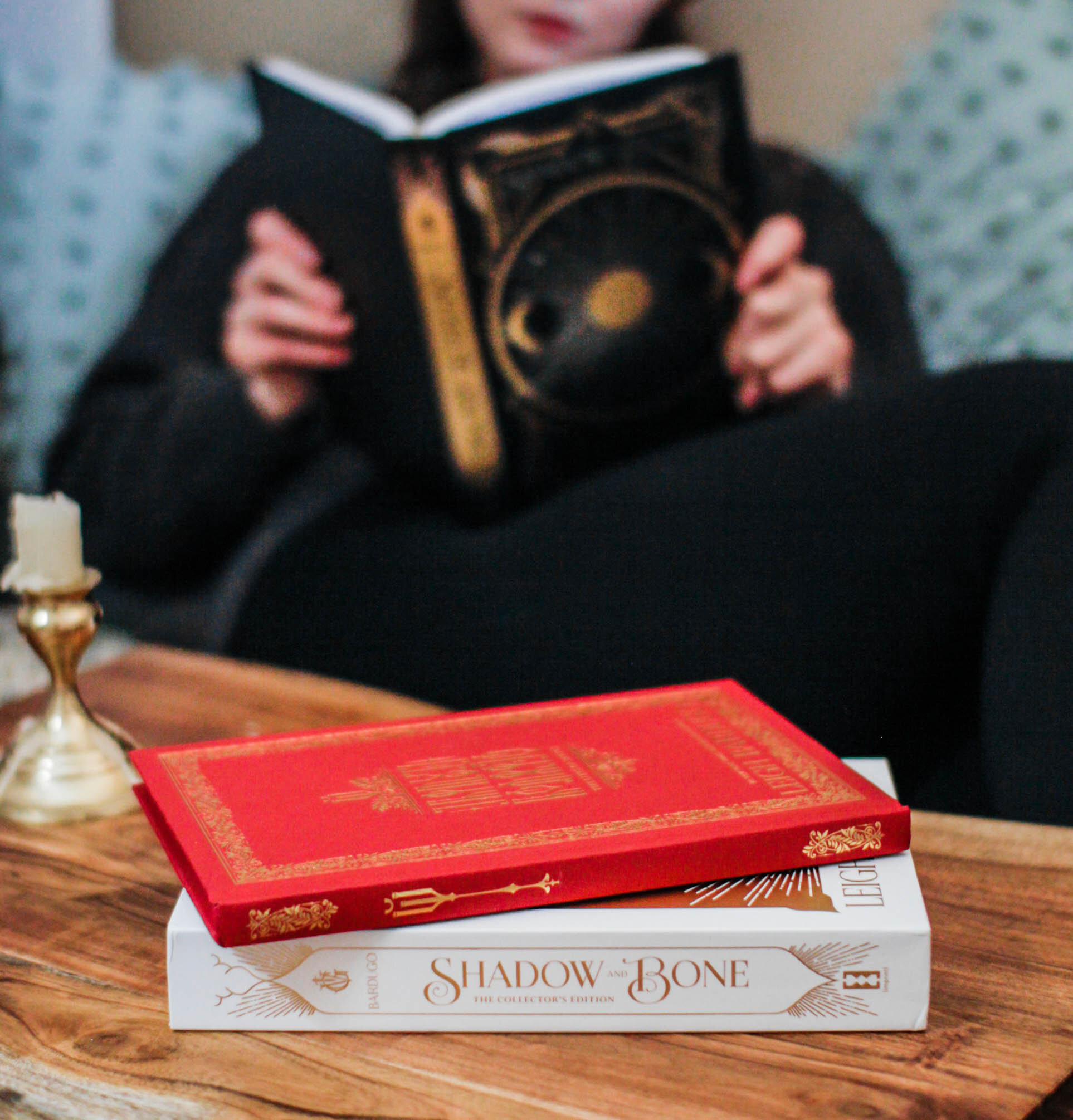 I would recommend this book to people who have not yet watched the show and are looking for a popular YA fantasy world to explore. Otherwise, for those who watched the Netflix adaptation of Shadow & Bone and loved it, I would not be quick to recommend the book. The episodes were not a true adaptation to the books so depending on what the viewer gravitated towards, they might not enjoy the books in the same way. The show combined the Shadow & Bone trilogy with Leigh’s duology, Six of Crows. The characters are also majorly tweaked in the show from the book.

I think those who seek out binge-worthy, imaginative, and thoughtful plots will enjoy this book. Similar stories to Shadow & Bone are the classic dystopian YA trilogies The Hunger Games and Divergent. Fantasy series with similarities to the Grishaverse are Harry Potter and The Red Queen—they have the same extraordinary world-building components.

Overall I would give this book 2.5 out of five stars. I wouldn’t reach for this book again unless I’m reading with someone else/for book club. Plus the style of writing which tells instead of shows us the author’s point was distracting and a bit of a bother for me. I also thought at times it was too jumpy and the characters went through either a “blah you’re boring phase” or an “oh wow you’re cool” and there was no in-between or consistent progression to support either. The ending was also difficult to justify as a reader because it went against everything the book hyped up, introduced, led to, and then it ended in a “now everything is sunshine and rainbows” style. The cliffhanger was also in my opinion played down with the transition to the third person. This change overrode the shock factor the final chapter produced. I had to re-read a few pages because I thought there was a time jump. The writing and story weren’t clear with what happened and made it seem like the main characters lived happily ever after and the conflict was poof gone.

IF YOU FOUND THIS POST HELPFUL, PLEASE SUPPORT ME WITH A SMALL CONTRIBUTION ON KO-FI. THIS INFORMATION WAS PROVIDED FREE OF CHARGE AND I’D REALLY APPRECIATE YOUR SUPPORT SO I CAN CONTINUE PROVIDING HELPFUL INFORMATION TO YOU & OTHER READERS!